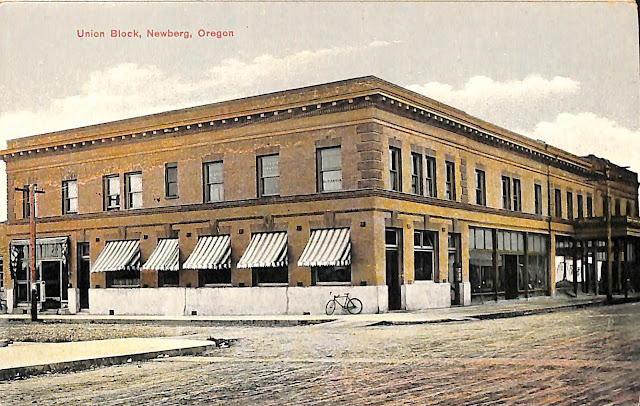 Mission: Preserve, present, and promote the history of Newberg and the surrounding areas.

Vision: To be the go to resource for Newberg area history, supporting historic efforts through research, preservation, funding, and outreach.

Welcome to the Newberg Area Historical Society, we are passionate about our local history and are excited to share this passion with you!
We will be celebrating Herbert Hoover's 147th Birthday with the Hoover Minthorn House Museum on August 7th from 12-3pm! You are invited to join us!

By Barbara Doyle This is part four of a multi-part series on the history of Central School, look for new installments in the weeks to come! Installments in this series are adapted from Barbara Doyle's book on this topic: From Then 'till Now: Schooling in Newberg, Oregon. Part One Part Two Part Three Part Five Part Six Part Seven Part 4 - A New Building The 1932-33 school year began just like the previous one – short on cash,  struggling financially in the Great Depression.  But the long view was more promising. In early 1933, Franklin Delano Roosevelt was elected president and his new Democratic government promised financial help. Newberg went for a $50,000 project – a new grade school – with residents taking on $35,000 bonded indebtedness and the federal government providing a $15,000 grant. The least costly plan was to build right on the existing site. The project moved forward – slowly. Thursday, January 24, 1935 was the last day of classes in the old school that
Post a Comment
Read more

The Morris, Miles and Co. building, erected in 1891, was the first commercial brick building in Newberg. At that time, Newberg had been an officially incorporated town for only two years. In this year, the fledgling Pacific Friends Academy added their college arm (later named George Fox University).Several businesses existed in the downtown and the Quaker settlement that had begun to take root was begining to flourish. The Morris, Miles and Co. drygoods and groceries business struggled financially and changed ownership several times thru the early 1900s. They sold a variety of materials, advertising their products in the Newberg Graphic. After Moris, Miles, and Co closed, Larkin-Prince managed a hardware store there for at least ten years thru the 1910s. Parker Hardware followed in the 1920s. There were times when the building was vacant and other times when it was divided into two separate stores. Then in 1944, Rolla Renne left his position as Superintendent of Newberg School
Post a Comment
Read more

By Britta Stewart If you’ve been around Newberg or George Fox University you may have noticed that the name Herbert Hoover comes up a lot. There is a Hoover building on the George Fox campus and a stretch of Highway 99W called Herbert Hoover Highway. It does seem unusual for a small town in the Willamette Valley to be seemingly obsessed with a president who is most often remembered by the economic turmoil of the Great Depression. However, a deeper look shows that this fascination is not that strange. Herbert Hoover actually called the Willamette Valley home for six years during his childhood.  Hoover, or Bert as he was often called, was born in West Branch, Iowa in 1874. Unfortunately, he was orphaned by the time he was nine and subsequently moved to Newberg when he was eleven to live with his uncle and aunt, John and Laura Minthorn.  Dr. Henry John Minthorn (John) and his wife Laura had recently moved to Newberg to teach at a school called Friends Pacific Academy. This was
1 comment
Read more

In 1836, Ewing Young, seeking a way to support himself, began a distilling operation. He purchased materials and constructed a still. The historical record conflicts on whether or not he actually began distilling however. Ewing Young's operation was vehemently opposed by Dr. John McLoughlin factor of Fort Vancouver for the Hudson's Bay Trading Company and by Reverend Jason Lee and others from the Methodist Mission established in the Willamette Valley. Whether or not Ewing Young actually produced any "spiritous liquors" is unknown, but we do know that the attempt to begin the operation led to another world changing event. In an effort to dissuade Young from distilling, McLoughlin, Lee, Slacum, and others contracted with Young to form the Willamette Cattle Company, bringing cattle to the Willamette Valley, breaking a monopoly on the cattle market held by the Hudson's Bay Company.  This is a image of a contemporary distilling operation from Sutter's Mill. Photo
Post a Comment
Read more

By Chuck Zickefoose Why mysterious?  His name shows or has shown up on sidewalks around Newberg.  The sidewalk faces have a distinctive white paint-like appearance not seen on other walks in town.  Also he is associated with two “Union Block” buildings, one in McMinnville, the other in Newberg.  It is supposed that the “E” in his name stood for either Elsia or Elza according to Polk’s Directory of 1912-13 for McMinnville, Oregon.  His occupation is listed as a cement worker.  Other sources name him as a contractor building sidewalks in McMinnville as well as a harness maker. There are three sections of sidewalks in Newberg that are presumed to have been laid by Wright, these are: West side of S. College St south of First St West side of Blaine, E. Sheridan and south on Washington West side of Main St. north of Hancock to Franklin St. The distinctive markings are evident on each of the above stretches of sidewalk: Sheridan and Washington Sts. West side of S.
Post a Comment
Read more

By Barbara Doyle This is part one of a multi-part series on the history of Central School, look for new installments in the weeks to come! This and future installments in this series are adapted from Barbara Doyle's book on this topic: From Then 'till Now: Schooling in Newberg, Oregon . Part Two Part Three Part Four Part Five Part Six Part Seven Newberg Oregon was just like many other small towns in late nineteenth century America.  We had a one-room wooden schoolhouse with students that could vary between five and twenty years of age – with just one teacher. Erected in 1881, the building was located at the Northeast corner of Main and Illinois streets. Initially thirteen students attended this ungraded public school. Students progressed individually thru the educational program. Good spelling and penmanship plus competence in simple arithmetic and understanding the words and ideas in Readers [numbered 1-6] was often the equivalent of an eighth grade education. This buildi
Post a Comment
Read more

By Barbara Doyle This is part two of a multi-part series on the history of Central School, look for new installments in the weeks to come! This and future installments in this series are adapted from Barbara Doyle's book on this topic: From Then 'till Now: Schooling in Newberg, Oregon. Part One Part Three Part Four Part Five Part Six Part Seven Newberg didn’t get a new school. The community got an enlarged school. The site purchased in 1889 covered a bit more than three acres – that’s plenty of room to expand the existing school. The 1892 plan included raising the building three and a half feet providing basement space for a furnace and a foundation for a four room addition. But only two of those rooms were used initially. Student population continued to rise reaching more than four hundred in 1893. Then the economic depression labeled the ‘Panic of 1893' struck. Student attendance dropped off – families left town and some students ignored mandatory attend
Post a Comment
Read more