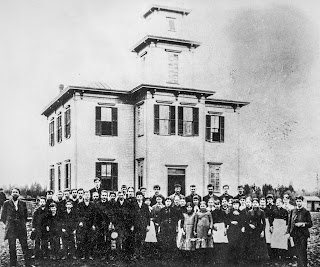 If you’ve been around Newberg or George Fox University you may have noticed that the name Herbert Hoover comes up a lot. There is a Hoover building on the George Fox campus and a stretch of Highway 99W called Herbert Hoover Highway. It does seem unusual for a small town in the Willamette Valley to be seemingly obsessed with a president who is most often remembered by the economic turmoil of the Great Depression. However, a deeper look shows that this fascination is not that strange. Herbert Hoover actually called the Willamette Valley home for six years during his childhood.

Hoover, or Bert as he was often called, was born in West Branch, Iowa in 1874. Unfortunately, he was orphaned by the time he was nine and subsequently moved to Newberg when he was eleven to live with his uncle and aunt, John and Laura Minthorn.  Dr. Henry John Minthorn (John) and his wife Laura had recently moved to Newberg to teach at a school called Friends Pacific Academy. This was the precursor to what is now George Fox University and Bert spent his three years in Newberg attending the new school. Today the campus commemorates his time there with buildings named after him and his uncle. In front of Minthorn Hall there is even a stone that boasts “Herbert Hoover slept here.” While it is true that Hoover did sleep here in Newberg, it is unlikely that he actually spent the night in Minthorn Hall or Kanyon Hall as it was called while he was a student. Hoover received free room and board from his aunt and uncle, he had his own bedroom in their house, and had many chores to help them with so it is more reasonable to assume that Bert spent his time in the Minthorn’s home and not a campus dormitory.

Ultimately, Hoover only spent three years of his childhood in Newberg. He moved to Salem, Oregon with the Minthorns in 1888 when he was 14 years old. His uncle had taken a job with the Oregon Land Company and Bert chose to work with him as an office boy instead of finishing high school. He spent the following three years learning business skills and developing his plan for the future. This led him to Stanford University and a wildly successful career as a mining engineer. Even though Hoover’s time in Newberg was relatively short, he began to develop skills and beliefs that would impact him throughout his adult life. His Quaker faith and outstanding work ethic are two things that can be directly tied to his uncle John. In addition to practical life skills, Hoover also learned how to fly fish while living in Newberg. This proved to be a significant development in the young sportsman’s life and led to his title of the “Fishing President.”

At first glance the excess of Hoover cheer in Newberg may be confusing. However, with a closer look it becomes clear that during Newberg’s formative years, the community was imparting significant lessons during a formative period of a future president’s life. Next time you're in Newberg be sure to stop by the Hoover-Minthorn House Museum or walk around the George Fox campus to see Minthorn hall.